Situated at the foothills of the Shivalik ranges, Parwanoo is surrounded by majestic landscapes. The city has a rich culture that is often portrayed in the daily lives of the inhabitants. Famous for their vibrant attires and beautiful handicrafts, the people of Parwanoo display a very kind and amiable temperament. Their pure modesty is revealed in their folk songs and conventional dances.

Hinduism is the main religion of the people in the city. Brahmins and Rajputs make the Hindu communities. The tribal communities found in Parwanoo are the Van Gujjars. These pastoral tribes are Muslims by religion and practice transhumance. However, the tribal folks have their own primitive beliefs and myths. The people dwelling in the hilly terrain speak Pahari and Hindi languages. Most of them are engaged in farming and cattle rearing.

Folk dance is an imperative component of the vivid culture of Parwanoo. The various traditional dances are much influenced by religion. Most of the festivals and religious rituals are accompanied by folk dances.

Also known as Paruhan, the Pahari Giddha is a popular traditional dance performed by women in groups.

This ancient dance is performed by men with bows and arrows. It is believed that the Thodo was performed by dancers as a ritual before battles.

This demon dance is the most prominent folk dance in Parwanoo. It is characterized by big colorful masks that are worn by dancers.
Other ancient customary dances are Dulshol, Drodi, Dharveshi, Dangi, Dev Naritya, Lasa and Nati.

All major festivals of India are celebrated by the people with great joy and enthusiasm. Holi is one such festival that is celebrated in March. The jubilation lasts for two days.

As the region is influenced much by the legends of Lord Shiva, the festival of Shivratri holds great importance in the lives of the local people. People make idols of Lord Shiva and Mata Parvati using soil or cowdung. They observe fasting and sing songs in devotion to Lord Shiva. 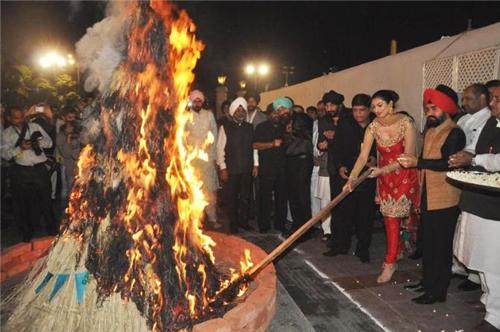 Also called Maghi, the festival of Lohri is celebrated in January to commemorate the last sowing season of crops. The festival is marked with folk songs, dances and community bonfires.

It is a significant festival related to the Buddhists. Lossar is celebrated in the end days of February to mark the commencement of the New Year. The religious celebration includes different mask dances and dramas accompanied with traditional music. The unique feature of the Lossar festival is the Chham dance. People from far and wide come to enjoy the traditional dance.

Art and Craft in Parwanoo

The artistic handicrafts made by the artisans of Parwano are quite popular throughout the country. The region is known for Kohana wall hangings, Thapadas or embroidered shawls and colorful embroidered caps. Apart from these, beautiful woolen rugs and carpets in pahari design are also in demand. Artistic bamboo items such as racks, baskets and boxes are found in bright colors. These products are mainly crafted by the Dom tribe.

Comments / Discussion Board - Culture of Parwanoo